Burundi President, Gen. Evariste Ndayishimiye, has reminded everyone that he is a military general and nobody should ever make a mistake of messing around with him.

Ndayishimiye made the remarks on Saturday during the launch of the 2022-2023 judicial year in the political capital, Gitega.

According to the angry President, who delivered a strong worded speech, revealed that there is someone in his regime, a traitor, that is planning a Coup d’etat against his regime. He didnt mention the names.

“Who can threaten a General with a coup d’etat,”Ndayishimiye wondered amidst a very silent audience. He claimed to have “God on his side”. He said that he therefore ready for war, if necessary. “Let him come face me. In the name of God, I will defeat him”.

The President sited the story of “Maconco”.

It is this Prince to whom King Mwezi Gisabo had given everything: power, and even his own daughter. But greedy, Maconco eyed the royal throne.

Like Maconco in Burundi history who launched a rebellion against the king, the current “Maconco” is preparing “a coup”, the President narrated.

The Maconco end of the story is violent, tragic: the traitor is defeated, killed. King Mwezi emerges victorious from this showdown. According to President Ndayishimiye, the fate of the current “Maconco” is already sealed: he will be defeated.

It will be noted that throughout his speech, the Burundian President never specified the name of “Maconco”, whose betrayal is nevertheless known and the failure predicted. 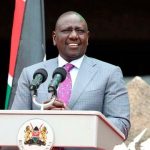 We can’t give power to Kyagulanyi-Singh